Hugh (Macdonald Carey) and Miriam Halsworth (Claudette Colbert) are in the final stages of their divorce procedure. Miriam wants to separate because he’s addicted to gambling – although he often wins. She’s living with her daughter Barbara (Barbara Bates), her son-in-law Jerry Denham (Robert Wagner) and her little grandchild. Hugh, who’s living at the hotel where he works, makes a fuss with the gardener about his rosebushes.

Hugh is also Jerry’s boss. They work in the publicity department for the Miramar Hotel and have to follow Victor Macfarland (Zachary Scott), a self-made millionaire who’s trying to get on the financial advisory committee for the President. Twenty years ago Hugh and Victor were rivals for Miriam’s hand.

A blonde fortune hunter, Joyce Mannering (Marilyn Monroe), is trying to attract Victor, but he’s only interested in winning back Miriam. She accepts his marriage proposal, but is disappointed when he postpones the marriage for a hearing on his appointment in Washington. Just before he steps on the plane he explains to Miriam why he left her twenty years ago (but the audience can’t hear what he says because the plane makes too much noise). 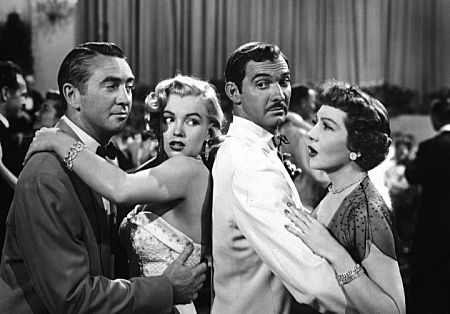 Miriam is furious with Hugh but he doesn’t know why. She refuses to let him in, which leads to a comical intermezzo in which Hugh and Jerry are arrested by the police. They are identified by Miriam and Barbara, and leave the police station.

Back home Miriam explains to Hugh that she was so angry because Victor told her that twenty years ago Hugh won her hand in a game of craps. Hugh admits this, and still has those two dice with him. He asks her to throw. It turns out the dice were loaded; they always throw three and four. Hugh admits he cheated because the stake was so high. Miriam is pleased with this explanation and they reconcile.

The New York Daily Mirror said of the film:

“Claudette Colbert is a capable farceur, but she cannot make Let’s Make It Legal as merry as it was hoped. While she is on the Roxy screen the comedy skips along, but when her co-stars take over the plot labors. … It suffers from a weak script and incredible characterizations by Macdonald Carey and Zachary Scott… Marilyn Monroe parades her shapely chassis for incidental excitement. … Let’s Make It Legal is a valiant effort by Claudette Colbert, who cannot overcome the handicaps.”

“The Roxy’s Let’s Make It Legal is an inconsistent farce that luckily has sufficient saving graces, the predominating benefit being performances by the popular and comedy-wise co-stars, Claudette Colbert and Macdonald Carey. Their presences and a satisfactory amount of bright dialogue counteract strained farcial situations and indifferent story… Marilyn Monroe is amusing in a brief role as a beautiful shapely blonde who has her eye on Zachary Scott and his millions.” 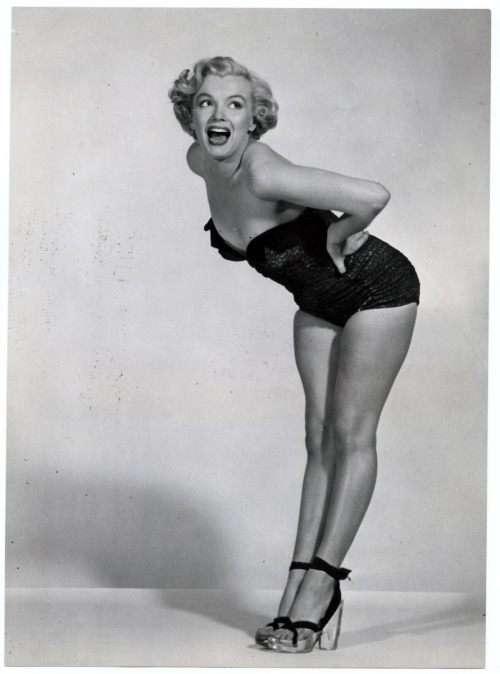 It’s the 50’s: everyone is dressed up at work and at home, pitchers of dry martinis are the order of the day, and liberal use of DDT is the best bet for killing aphids on roses. You can’t help but smile at some of this stuff. There’s nothing terribly amazing about the script in this romantic comedy, which has a couple (Claudette Colbert and Macdonald Carey) divorcing after 20 years of marriage, and a jet-setter and old flame (Zachary Scott) swooping in on her. What’s fun is the cast – Colbert is a delight and looks fantastic at age 48, her son-in-law is played by a slender 21-year-old Robert Wagner, and a blonde fortune hunter who appears in a few scenes is played by 25-year-old Marilyn Monroe, right before she became mega-famous. It’s light entertainment with a cutesy ending.

Enjoyabler even if the characters were terribly written.

This is a seriously flawed movie that still manages to be interesting–an odd combination to say the least. With a slight re-write, this could have been a much more enjoyable film.

The film finds Claudette Colbert living in a house with her annoying daughter and son-in-law. As for Colbert’s husband (Macdonald Carey), he’s about to become the ex-husband–though the divorce was not his idea. Colbert is sick of Carey’s gambling and he shows no sign of changing. As for the son-in-law (a very young Robert Wagner), he’s sick of living with his in-law and it’s all his wife’s idea. The wife (Barbara Bates) is very, very lazy and likes that her mother takes care of her and the baby–and she also holds out hopes that her parents could reunite. But Wagner is against it–and would LOVE to see Colbert marry her rich old sweetheart (Zachary Scott) as they’d undoubtedly leave to live in his mansion–and Wagner and his wife could FINALLY be alone. Much of the film consists of Colbert being wooed by Scott and Carey trying to win her back. 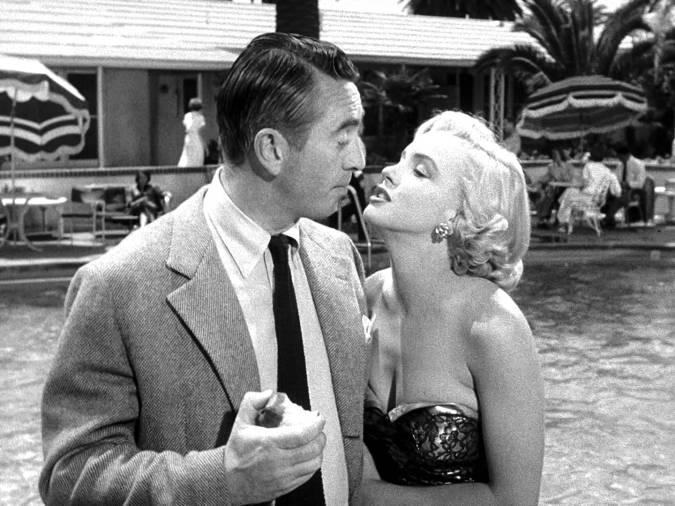 The basic story idea is good, but the execution left quite a bit to be desired. The problem was in the characters. With the possible exception of Colbert, the rest were all very, very difficult to like! The daughter (Bates) in particular was awful and very one-dimensional–and nothing like a real human being. To call her annoying is a definite understatement and I was looking for Wagner’s character to rap her in the mouth (and I usually am strongly against spousal abuse…but I’ll make an exception here). Wagner is a bit selfish and hard to like–plus he needed to show some backbone. As for Carey, he WAS a gambling addict and SHOULD have been divorced! Yest, by the end of the film, he hasn’t changed one bit…yet he DOES win his wife back despite this! Finally, the film is predictable and hasn’t got a decent payoff.

By the way, in another case of deliberately dishonest marketing, Marilyn Monroe is on the DVD case and all recent advertising. However, she’s barely in the film at all—and if you’re not paying attention you might not even notice her!!