Charlotte ‘Charlie’ Newton is bored with her quiet life at home with her parents and her younger sister. She wishes something exciting would happen and knows exactly what they need: a visit from her sophisticated and much traveled uncle Charlie Oakley, her mother’s younger brother. Imagine her delight when, out of the blue, they receive a telegram from uncle Charlie announcing that he is coming to visit them for awhile. Charlie Oakley creates quite a stir and charms the ladies club as well as the bank president where his brother-in-law works. Young Charlie begins to notice some odd behavior on his part, such as cutting out a story in the local paper about a man who marries and then murders rich widows. When two strangers appear asking questions about him, she begins to imagine the worst about her dearly beloved uncle Charlie.

Alfred Hitchcock said that part of why he considered this to be his favorite film was that he loved the idea of bringing menace to a small town.

Teresa Wright did not read the script before agreeing to sign on for the film. Alfred Hitchcock described the plot to her in a meeting and she agreed to take on the part immediately. 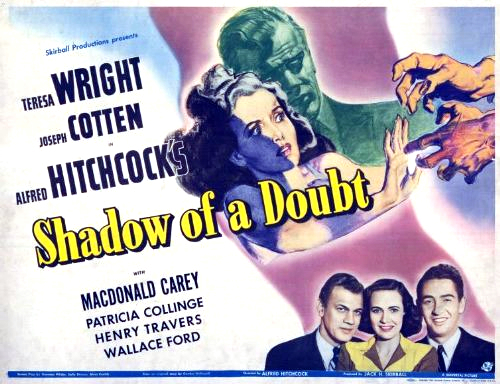 Shadow of a Doubt is perhaps Hitchcock’s first real masterpiece – a more mature film than The 39 Steps or Rebecca. It is also incidentally his favorite of his own films. The sleepy town of Santa Rosa is far removed from the very real events of WW-2, events that figured at least a mention if not a central influence on most films of that period. Hitchcock’s Rear Window and Vertigo were also far removed from the realities of the Cold War and the Communist Witch-Hunts of the 50’s. 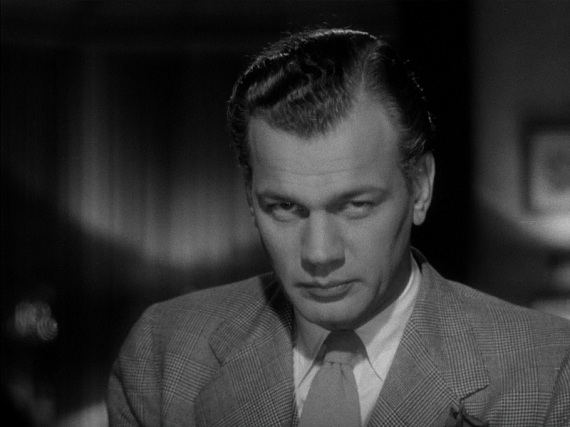 Shadow is taut with sexual tension – the incestuous overtones of the mental affinity of niece and uncle Charlie, the lusty infatuations of Charlie’s teenage friend Catherine, and Herb, who just happens to be around the corner where ever we see Charlie. Charlie, the niece, is played by Teresa Wright in one of Hitchcock’s best female performances. She is very warm, innocent and genuinely good-natured – completely unlike Hitch’s usual icy blonds. I have always found Joseph Cotten to be quite inexpressive. He is slightly better than his usual self and is believable in charming and winning over the small town-folk.

This is probably Hitchcock’s only film with a strong human core, coupled with his well-known skills as a master technician. What other director of the era could have revealed the murderer at the start of the film and still maintained tension and a lingering unease throughout. Shadow of a Doubt is a precursor to the menace of Blue Velvet and the sexual tensions of American Beauty – and stays with you much longer than either of them. 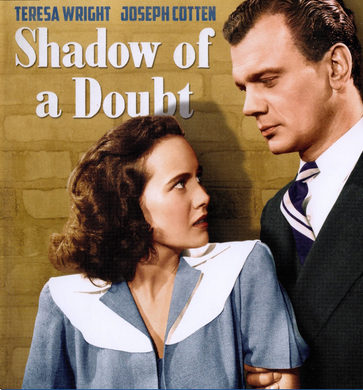 I own the Hitchcock collection (14 films in toto), and while this isn’t my favourite of the bunch (‘Psycho’ is one of my favourite movies of all time, and ‘Birds’ never gets old), I like to watch it every now and again to remind myself what it means to make a “suspense film”, and why Hitchcock was and always will be the master of this craft.

To give away even the slightest story detail would ruin it for new viewers, because it is essential that everyone begin with the wrong impressions of the major characters. This allows Hitch to pull off his famous ‘twists’ throughout the course of the movie, hitting you every now and then with something you simply weren’t expecting.

One of my favourite elements in the movie is the ongoing dialogue between Henry Travers and Hume Cronyn, avid mystery readers who are constantly discussing the best ways to murder each other. Apart from being a bit of comic relief in an otherwise very dark film, it also demonstrates how lightly people think of murder and murderers…until they encounter them face-to-face.

My advice then, if you want to see this movie, is not to learn anything about it beforehand. Going in with no knowledge will increase the movie’s initial impact, and will help you to appreciate why Hitchcock was the ‘Master of Suspense’. This is a taut thriller with no gratuitous violence, foul language, or mature situations.

(Hitch considered it ‘a family film’.)

Uncle Charlie did it for me. I mistrusted the uncle thing as a term of endearment ever since. Joseph Cotten is the perfect charming monster. Uncle Charlie’s urbanity becomes his most frightening feature. So plausible. So real. Thornton Wilder was Hitchcock’s partner in crime this time and it shows. The structure is Our Townish, the characters, deliciously rich. Patricia Collinge’s performance is so spot on that you’re longing for more. The scenes between Henry Travers and Hume Cronyn are how I imagine the story meetings between Thornton Wilder and Alfred Hitchcock. Teresa Wright’s eyes tell the whole story from the audience’s point of view, even if the audience is one step ahead of her. Brilliant, because in Joseph Cotten’s eyes we find his need for redemption or are we falling in the trap of this master manipulator? We are torn, just like Teresa Wright. I’ve seen “Shadow of a Doubt” 3 or 4 times but every time you’re forced to take the trip with the same amount of commitment. I’ve been toying with the thought of a remake, I’ve been doing this lately, although I hate the idea of remakes of great movies, this one is one of those that in the right hands could have a real impact. Using Thornton Wilder’s original script as the Bible, Steven Sodebergh could do scrumptious remake for the new millennium. Tim Robbins as uncle Charlie, can you imagine? Natalie Portman as his niece. Joan Cusak and William H Macy as her parents. Wouldn’t you go to see that?